In this tutorial, we are going to describe how to use and deploy DidiSoft OpenPGP Library for .NET with Microsoft Azure Function Apps.

The steps below describe the deployment of the library in a Function App that reads and writes data to Azure Blob storage. A video and steps by step instructions follow below:

Transcript and Step by Step instructions

Using OpenPGP Library for .NET on Azure in a few words is no different from any other type of .NET project. We just reference the library assemblies and invoke the PGP cryptography methods.

But when using Azure there are some DevOps steps that we have to perform beforehand in order to prepare the deployment environment.

The default settings are enough for our demo application. The “

The runtime stack will be .NET Core. We will reuse an existing storage account and an existing resource group. Application Insights are optional but useful for tracing errors and exceptions.

For this example, we will be using a Blob trigger, but developing another type of Function Apps will be very much similar.

In order to use the library, we have to add references to it. We can do that by getting it from NuGet. For a demo project we will be using the trial version from nuget.org (In production of course we’ll be using the private NuGet repository instead):

Then we can modify the Blob trigger code, by invoking the encryption method like:

The key can be hardcoded for a test project, but in a real-world scenario, it shall be obtained from a Key Vault.

Now we are ready to deploy the solution to Azure into the Function App that we have created at the beginning (mypgpfunc). 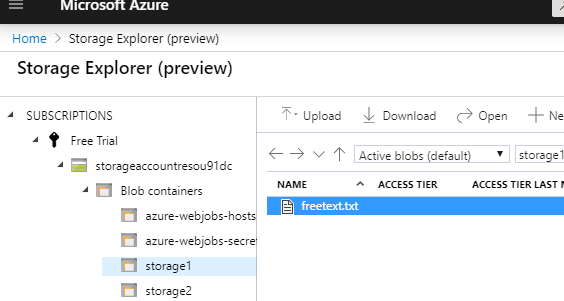 The uploaded file it will automatically become encrypted by the Blob trigger in container2 as shown below: 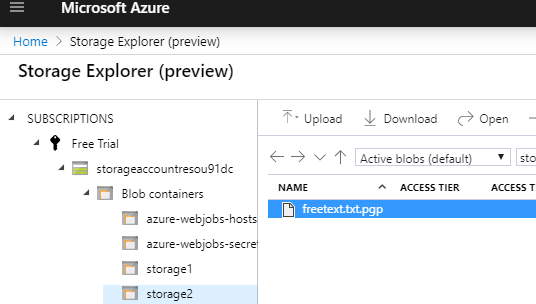 For an Azure Function App with PowerShell Core as Runtime stack, we have to load the DidiSoft.Pgp assemblies manually via PowerShell.

For PowerShell Core 7.0 we have to use the files from the folder \OpenPGP Library for .NET 1.9.3\Bin\NetStandard2.0.

In the example code which represents an Http PowerShell Trigger function, we have copied the files in the /bin subfolder. This trigger encrypts with a password in PGP format the “Message” request parameter and outputs the encrypted result.

With large input files, we may reach the maximum execution time of a Function App. In that case, it is a good idea to start a Batch Service Job from the Function App.

This tutorial is an introduction to how to get started with OpenPGP Library for .NET and Azure. The library can be used inside all Azure services implemented with .NET or PowerShell.

DidiSoft is a software vendor company specialized in security and business software solutions.

A fork of BouncyCastle Java library with support for decryption of OpePGP AEAD packets : https://github.com/didisoft/bc-java/tree/AEAD_DECRYPTION

This website uses cookies to improve your experience while you navigate through the website. Out of these, the cookies that are categorized as necessary are stored on your browser as they are essential for the working of basic functionalities of the website. We also use third-party cookies that help us analyze and understand how you use this website. These cookies will be stored in your browser only with your consent. You also have the option to opt-out of these cookies. But opting out of some of these cookies may affect your browsing experience.
Necessary Always Enabled
Necessary cookies are absolutely essential for the website to function properly. These cookies ensure basic functionalities and security features of the website, anonymously.
Functional
Functional cookies help to perform certain functionalities like sharing the content of the website on social media platforms, collect feedbacks, and other third-party features.
Performance
Performance cookies are used to understand and analyze the key performance indexes of the website which helps in delivering a better user experience for the visitors.
Analytics
Analytical cookies are used to understand how visitors interact with the website. These cookies help provide information on metrics the number of visitors, bounce rate, traffic source, etc.
Advertisement
Advertisement cookies are used to provide visitors with relevant ads and marketing campaigns. These cookies track visitors across websites and collect information to provide customized ads.
Others
Other uncategorized cookies are those that are being analyzed and have not been classified into a category as yet.
SAVE & ACCEPT